Oh My Giddy Aunt*!!  I think I have finally figured out a way that I can finish Wendy's Tat along.... 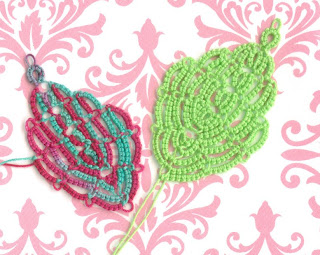 I added split rings to the middle and that helped tremendously!! I don't even want to show you the MANY attempts I tried before trying this route!  They are pretty cute!
If you try this way, I started with the top, (5-5) and then followed with 4 split rings.  Then the rest of the pattern should be the same. But really, you could do 4 rings and then chain over them and then chain up the other side, especially if you aren't confident with split rings.
Oh!!! AND the first one is size 60, in some thread I dyed "ages" ago, yea right, its probably only  been a couple of moons ago. lol It was one of the first.  Then the second is size 40 Lizbeth Lime Green.
I may do some more in HDT, but I didn't want to use the HDT until I knew I could do the pattern. :o)
Now, if I could just find the flowers I tatted... (**oops**)  I've done tons of the flowers, but I can't find any of them.  One of these days, I'll find all my missing finished tatted pieces.  Knowing my luck, Layla has found them and drug them under the bed, under the coffee table, or wherever she hides things.  Have you ever had that happen, you cat owners?  You finally get around to cleaning under the bed and to your surprise there are a hundred cat toys in a small pile lol.
One time, I found over 150 hair ties in Livi's toy box.  I thought it was amazing because I had been losing hair ties left and right. So, then I got to thinking that Livi had put them in there.  No, I found out that Chris would throw them in there whenever he found one. I only wish he had told me that before I went around telling folks (like her grandparents) that I had found her hiding stash of hair ties.  I felt so silly, and a little disappointed, because that would have made for a cute story lol.
*"Oh My Giddy Aunt" was from Gnomeo and Juliet, I like it SO much better than any of the other "OMG" sayings.
Posted by ** jess! ** at 8:20 PM